The most recent King in Rwanda ruled in the 1950s and his palace has been converted into a museum. Next door to the museum is the -more interesting- last palace of Mwami. The traditional palace is surrounded by multiple, smaller huts that housed goods like milk, banana beer (!), and family members. Rwandan kings were allowed to have many wives at their various palaces throughout the kingdom. Oddly, the King's mother determined which of his wives would stay in his hut each evening ;) Just behind the huts are the long horned cows that were traditionally associated by the Rwandan monarchy. 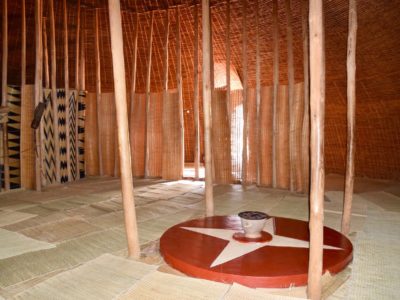 The ‘Land of a thousand hills’ maybe associated with the Rwandan Genocide in 1994, but it’s a surprisingly peaceful country of friendly people who are very optimistic about their country's future. If you are into mountain gorilla’s, beautiful lush green rural scenary, volcanoes, rolling hills and valleys combined with lakes and beaches - this is the place to go.

This must see is part of
the following Rwanda itinerary: